ANSWER-07
Which day did the Messiah rise on, Saturday or Sunday?

Nothing could be further from the truth than the Sunday resurrection, this has got to be the biggest deception in the Christian church today and of all time. This will be a bit hard to explain to someone who is unfamiliar with the Messianic Feasts but I will do my best.


First I would like to establish the fact that there are annual Sabbaths (High Days) throughout the year, two of which are in the month of Aviv which is the month in question.

'These are the appointed times of Yahweh, set-apart gatherings which you are to proclaim at their appointed times. In the first month, on the fourteenth day of this month, between the evenings, is the Passover to Yahweh. 'And on the fifteenth day of this month is the Festival of Unleavened Bread to Yahweh - Seven days you eat unleavened bread. 'On the first day you have a set-apart gathering, you do no servile work. 'And you shall bring an offering made by fire to Yahweh for seven days. On the seventh day is a set-apart gathering, you do no servile work.'"(ISR Wayyiqra 23:4-8)

Now that we know that besides there being the normal weekly Sabbath during the month of Aviv there is also a Sabbath on the 15th which is the beginning of the Feast of Unleavened Bread, and on the 21st which is the end of the Feast of Unleavened Bread. The day before any Sabbath is called Preparation-Day, so besides every Friday being a Preparation-Day to the weekly Sabbath, the 14th (Passover) and 20th day of Aviv are Preparation-Days to the annual Sabbaths (High Days) that are on the 15th and 20th day of Aviv.

So we see here that the Messiah said that he would be entombed for three days and three nights which is roughly 72 hours.


Third I would like to establish the exact time of the death of the Messiah, and with that we will know when Messiah's resurrection took place.

And it was the of preparation for Pesach, and it was about the sixth hour. And he said to the Judeans, Behold, your king. (HRV John 19:14)

Now it was Preparation Day of the Passover week, and about the sixth hour. And he said to the Yehudim, "See your Sovereign!" (ISR Yohanan 19:14)

And again later in another verse we get the exact time again.

And the Judeans, because it was the day of preparation, were saying, These bodies should not remain overnight on their gallows because the Sabbath is drawing on, for the day of that sabbath day was a high day. And they entreated Pilate that they might break the legs of those crucified and take them down. (HRV John 19:31)

Therefore, since it was the Preparation Day, that the bodies should not remain on the stake on the Sabbath - for that Sabbath was a high one - the Yehudim asked Pilate to have their legs broken, and that they be taken away. (ISR Yohanan 19:31)

So we now have an exact time of the execution and death of the Messiah, it was on Preparation-Day but we see here that it was not on Preparation-Day to the weekly Sabbath but Preparation-Day to an annual Sabbath (High Day) which was the Passover and fell on a Wednesday. John was very specific and careful to point this important detail out. We also know it was about the sixth hour that his execution began which is about 12:00 noon and that he died about the ninth hour which is about 3:00 in the afternoon. They still had to carry His body to the tomb and prepare His body for burial which had taken some time to do which means that they had probably rolled the stone in place to seal the tomb very late in the day.


Fourth I would like to establish the exact time of the resurrection now that we know the exact time that Y'shua was entombed. Lets do some very basic math, starting with Wednesday late after-noon start adding three days and three nights to it. If you add one you get Thursday, add two and you get Friday, add three and you get Saturday which is the Sabbath late in the after-noon. Lets now look to see what the Scripture says.

And in the night that was drawing at the first of the week, while still dark, in the very [early] dawn Mariam from Magdala unto the sepulchre. And she saw the stone that it was taken from the grave. (HRV John 20:1)

And on the first day of the week Miryam from Magdala came early to the tomb, while it was still dark, and saw that the stone had been removed from the tomb. (ISR Yohanan 20:1)


Fifth I would like to establish the day of the triumphant entry. We now know that Y'shua was executed and entombed on the Passover which was Wednesday the 14th of Aviv. But this ritual of choosing the Sacrificial Lamb without blemish for the Passover and the entry of the Sacrificial Lamb into the city gates where it is observed for four days is on the 10th day of the month which would make it a Sabbath. lets take a look at the Scripture to see if there is any hint that the 10th day of the month of Aviv did indeed fall on the Sabbath.

And Yeshua entered into the Temple of Elohim, and cast outside all the vendors and buyers in the Temple, and overturned the tables of the money-changers, and the stalls of them that sold the doves, (HRV Matthew 21:12)

And Y'shua went into the Set-apart place of Elohim and drove out all those buying and selling in the Set-apart Place, and over-turned the tables of the money changers and the seats of those who sold doves. (ISR Mattithyahu 21:12)


Sixth I would like to establish the fact that it is physically impossible to have both "Palm Sunday" and "Good Friday" because from the 10th through the 14th you only get five days. There is no way in Gehenna that you can physically fit six days between the 10th and 14th which would be the case if the doctrine of "Palm Sunday" and "Good Friday" were true.

None of the traditional "Palm Sunday" and "Good Friday" doctrines make any sense at all, they just do not add up. Anyone trying to push such doctrine either has not taken a very close look at the Scripture, or is so spiritually blinded they can not see the truth, or they hate the truth so much that they refuse to accept it.


Last but not least, I would like to present a simple calendar for you to view to see for yourself the events that happened and when they took place almost two-thousand years ago. Remember that the day begins at sun-down, not at mid-night. 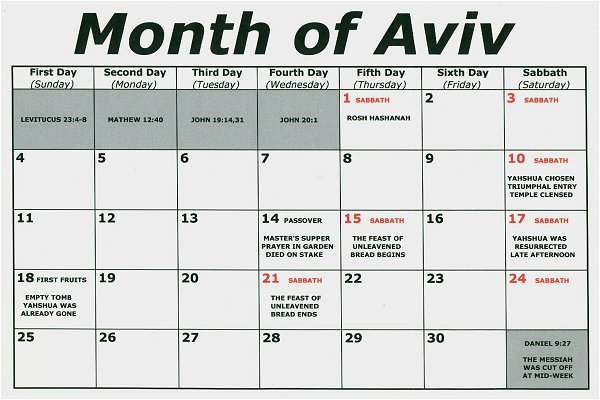