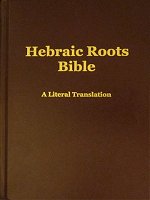 Here for the very first time is a literal translation of the scriptures with the sacred name of Yahweh and Yahshua, restored and preserved. Did you know in every bible translation including the King James Bible that our Heavenly Father's personal name Yahweh has been taken out and replaced with titles and even names of pagan deities more than 10,000 times?


Take a look at just a few of the mistranslations that have been handed down to us from the older corrupted versions such as Psalms 40:6...

King James (Psalms 40:6):
Sacrifice and offering thou didst not desire; mine ears hast thou opened: burnt offering and sin offering hast thou not required.

Hebraic Roots Bible(Psalms 40:6):
Sacrifice and offering You did not desire; But a body You have prepared for Me. You have not asked burnt offering and sin offering.

Clearly, this Messianic psalm makes much more sense when we see the prophecy is about Yahweh the Father preparing a physical body for the eternal Messiah, who was His son, to come and dwell for 33 years as a human being. This is clearly missed in the mistranslated King James version.

Hebraic Roots Bible (Matthew 19:23-24):
And Yahshua said to His disciples, Truly I say to you that a rich man will with great difficulty enter into the kingdom of Heaven. And again I say to you, It is easier for a heavy rope to pass through a needle's eye, than for a rich man to enter the kingdom of YAHWEH.

In Aramaic as in Hebrew there are no vowels, simply markings under the words, which many times are not listed. The word for camel in Aramaic is gamla and would look like this "gml". The word for heavy rope is gamala and would also look like "gml" without the vowels. So when the translator translated this scripture from Aramaic to Greek, he simply made a mistake and put camel instead of heavy rope. This is a Jewish idiom. You cannot put a heavy rope through a needle, but if you take it apart strand by strand, then one strand can go through. Yahshua is using this idiom to show that a rich person would need to give up his possessions strand by strand or piece by piece to enter the Kingdom of Yahweh.


There are literally 1,000's of examples such as above that are fully magnified in the Hebraic Roots Bible and will make the bible come alive as never before and easier to understand.

Obtain your own copy of this translation