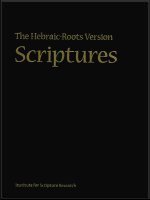 The "Old Testament" portion is called the "Tanak". This portion of the HRV is a Messianic Sacred Name translation from the original Hebrew and Aramaic (some small portions of the Tanak, such as a large portion of Daniel, are Aramaic). The books of the Tanak are in the original manuscript order and divided into three sections: The Torah (Law); The Nevi'im (Prophets); The Ketuvim (Writings).

The "New Testament" portion is titled "The Ketuvim Netzarim" ("Writings of the Nazarenes") and is also a Messianic Sacred Name Edition and is translated from the original Aramaic and Hebrew. The NT books are also in the original manuscript order (The Gospels; Acts; James, 1&2 Peter; 1,2,3 John, Jude; Pauline Epistles; Revelation) but the titles of the books are their Hebraic names. The HRV also divides the books into two sections The B'sorah (Goodnews) and The Sh'lukhim (Emissaries).

The original manuscript order had an important significance. It agreed with the precept that the message was to the Jews first and then to the Goyim (Gentiles). It also agrees with the concept that Ya'akov (James), Kefa (Peter) and Yochanan (John) were emissaries that come BEFORE Paul (Galatians 1:17) and with the concept that Kefa, Ya'akov and Yochanan served as three pillars which lend authority upon which Paul's message was built (Galatians 2:9) and not vice-versa. The reader was intended to read the "Jewish" epistles FIRST and then to read the Pauline epistles already having understood the Jewish epistles.

The NT reader was intended to read Ya'akov's (James') admonition concerning faith and works (Ya'akov 2) as well as Kefa's (Peter's) warnings about Paul being difficult to understand and often twisted (2 Kefa 3:15-16) etc. before ever attempting to understand the writings of Paul.

The HRV Scriptures formerly known as the Hebraic Roots Version Complete Messianic Study Bible is published by the Institute for Scripture Research. The Tanak (Old Testament) portion is translated primarily from the Hebrew Masoretic Text but contains over 2000 footnotes giving important alternate readings from the Aramaic Peshitta Tanak, Aramaic Targums, Dead Sea Scroll Manuscripts, Greek Septuagent, and the Samaritan Pentateuch. The Brit HaDashah (New Testament) portion is the first and only New Testament to be translated from ancient Aramaic and Hebrew manuscripts.

Obtain your own copy of this translation